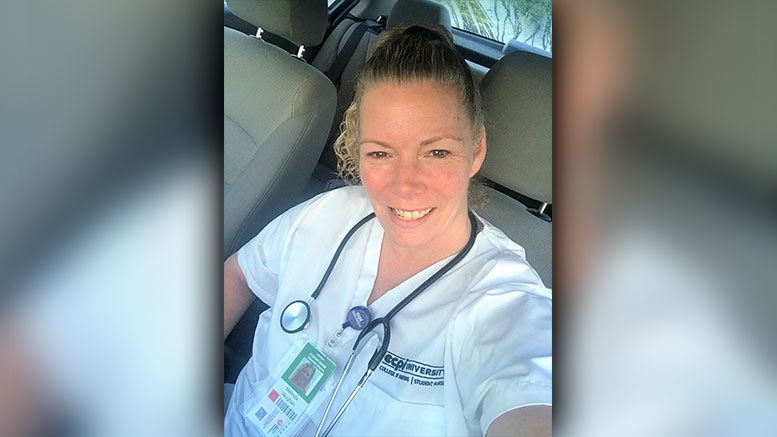 She had just completed her clinical rotation for the day when Mindy Vaughan was driving home. All of a sudden, an ambulance came flying by. Moments later, she came upon an accident scene, a motorcycle lying on its side and its rider thrown into a grassy area nearby. “At first, I thought the EMTs had driven right by the accident, not knowing they had missed it!” says Mindy.

As it turns out, that ambulance was heading to another accident. When a car ahead of it darted out of the way, it forced the motorcycle off the road. Mindy quickly did a U-turn and rushed to the rider’s side. She immediately immobilized his neck and spine, checked his pulse, pupils, and neuro-reflexes while waiting for emergency responders to arrive. Fortunately, the victim suffered only bruised ribs and a broken wrist.

“All I’ve ever wanted to do is help people. Right now, I feel like I’m in a dream that is finally coming true.”

As she is just halfway through her nursing program, it’s easy to assume this was Mindy’s first experience with an emergency such as this. Up until 15 years ago, however, she was both an EMT and volunteer firefighter. “It was good to know that all the skills I had not used for a very long time were still there,” she says. “The adrenaline just kicked in. I was in my comfort zone and I really did not think about anything else. It felt really good to help another human being.”

That’s all Mindy has ever wanted to do. She had to temporarily suspend her career when she married in 2004 and she and her husband, who was in the military, were deployed overseas. After their first child was born, she decided to stay home. Then last year, with her youngest then 13, she decided to fulfill a lifelong dream and become a nurse.

Mindy enrolled at ECPI University’s Northern Virginia campus and says it was one of the best decisions she has ever made. “Recently during my clinical rotation, I was helping an elderly blind lady with a bath,” she says. “At one point, she said to me, ‘you are going to be a great nurse.’ That just warmed my heart so much. All I’ve ever wanted to do is help people. Right now, I feel like I’m in a dream that is finally coming true.”

A Life Serving Others