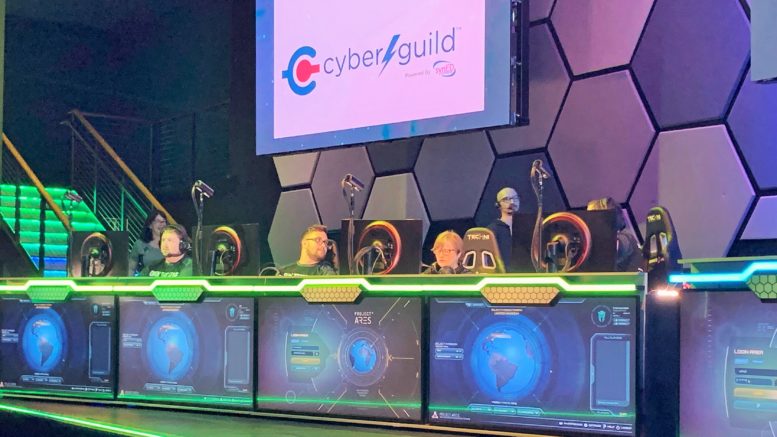 Mark Twain once said, “It’s not the size of the dog in the fight, it’s the size of the fight in the dog.” That most certainly applies to the talented members of the cyber team at ECPI University’s Columbia, South Carolina campus. This past summer, they advanced to the finals of the Wicked6 Cyber Games in Las Vegas…and came within just 1.5 points (out of 1,700) of winning the title, just behind the University of Colorado. To put this in context, ECPI University’s Columbia campus has 300 students. The University of Colorado…more than 33,000.

“This competition validates that our program delivers on its pledge to educate and train students to become highly-skilled cybersecurity professionals through our unique immersive, hands-on approach to cybersecurity education. These students are ready to hit the ground running in industry.”

Hosted by the Women’s Society of Cyberjutsu and sponsored in part by Microsoft and the National Security Agency (NSA), competitors at Wicked6 were challenged to exhibit critical cyber defense skills that directly map to abilities that corporate recruiters seek to fill the growing number of IT security jobs. “This was a scenario-based gaming cyber competition that challenged students’ cyber offensive and defensive skills,” says ECPI University Dean of Computer and Information Science Dr. Keith Morneau. “These scenarios were very challenging, real-world situations that cybersecurity practitioners face on a daily basis. Students needed to collaborate and communicate with their team to accomplish the scenario.

“It required all four team members to be engaged to be successful. They needed to apply everything we taught them in our Cyber and Network Security degree program and had to practice their skills over a six month period to reinforce what they learned. This competition validates that our program delivers on its pledge to educate and train students to become highly-skilled cybersecurity professionals through our unique immersive, hands-on approach to cybersecurity education. These students are ready to hit the ground running in industry.”

By itself, reaching the finals of such a competition is quite an accomplishment. However, ECPI University students are not like those they typically compete against. ECPI students – often referred to as non-traditional – excel while managing lives that are a bit more demanding. While balancing their competition duties with a full load of classes, they are also husbands and wives, mothers and fathers, and typically hold down full-time jobs.

Wendi Jonkers is one of six members on the team. She and her husband of 25 years stay busy raising their three children. Wendi learned a lot about computers while working at IBM, but had not yet earned her college degree. She decided to go back to school to study Cyber and Network Security but still maintains two part-time jobs.

Franklin Pearson is married with a two-year-old son. He worked about 45 hours a week for Brinks as a vault supervisor.

Jason Simmons says sleep is overrated. He runs a tax service and does computer repair and welding on the side.

Kevin Richards was pursuing a degree in nuclear engineering until the school he was attending dropped the program. Now, he works between 40 and 45 hours a week as a manager for a food service company while pursuing his degree.

Earl Knorr is a former welder who often worked up to 75 hours a week. As s student, he still maintained two jobs…one, a work-study position on campus, and another for an agriculture supply company. Combined, they accounted for about 50 hours of his week.

Kenyatta Alexander spent seven years in the U.S. Navy, serving as a cryptologic technician. He has just about finished with his degree in Cyber and Network Security but plans to stay at ECPI University for one more year to earn an additional degree in Software Development. For him, his education is a pathway to better provide for his wife and son.

Each member has a similar story. Many have overcome significant obstacles. All have become highly-proficient at time management. While their stories may seem extraordinary, they are typical of most ECPI University students who are looking to advance in the world but require a school that accommodates their busy lives. “Each of us is very driven,” says Cyber Team Member Kevin Richards. “We push each other to excel.” Moreover, they each share the belief that there is no time to waste. “I am not so young anymore,” says fellow teammate Wendi Jonkers. “At my age, I look for every opportunity I can.”

Members of the team know that making the finals of Wicked6 will look good on their resumes. For some, it’s already paid off. Both Earl Knorr and Franklin Pearson have accepted positions as senior tier cyber security analysts with Capegemini, a global leader in consulting, technology services and digital transformation. Cyber team coach Chris Flanery is not at all surprised. “They’re the best! This group put in the time and exhibited uncommon dedication.”

The Columbia team’s success in Las Vegas was far more than good luck. It’s the result of relentless preparation, and it’s the culmination of decades of curriculum development. Each ECPI University campus has an academic advisory board comprised of cyber and network security professionals, and twice-yearly they meet to review curriculum to help ECPI ensure that what’s being taught in the classroom translates into the real world.

Competitions like the Wicked6 allow students to take that knowledge and sharpen it under conditions that are as close to the real world as possible. That’s why ECPI University is committed to fostering team development on each of its campuses throughout Virginia, North Carolina, South Carolina, Florida, and Texas.

The Richmond-Moorefield campus is competing not just with other colleges and universities, but industry professionals as well. In the National Cyber League, the team boasts a Best Individual Rank of 120/3,633 (top 3 percentile) and team rank of 78/548 (14th percentile). And in the Cyberlympics in September, the team competed almost exclusively against corporate and private teams, placing 89/269, positioning itself in the top third globally among working cyber and network security professionals.

“Our students are already immersed in fast-paced, hands-on delivery of technology programs. The cyber defense teams give those who want an edge the opportunity to advance their skills to a greater level. When new students ask ‘how do I get the most from my time in school?’ I recommend they join the cyber defense team.”

This fall, the Virginia Beach Cyber Defense Team made a very strong showing at ODU: Cyber-OPS 2019, hosted by Old Dominion University. The four teams fielded by the campus placed fifth, sixth, seventh, and eighth out of 30 teams. For 2/3 of the team members, this was their very first competition. “They drew upon the new skill sets from their hacking club meetings, putting in long days and nights learning about the intricacies of computers and networks security systems,” says Virginia Beach Campus Computer and Information Science Program Director Scott Gibson. “I am truly proud of how well they performed. Being so new to this type of competition and placing as high as they did is a testament to their dedication to their studies and interest in the field of cybersecurity.”