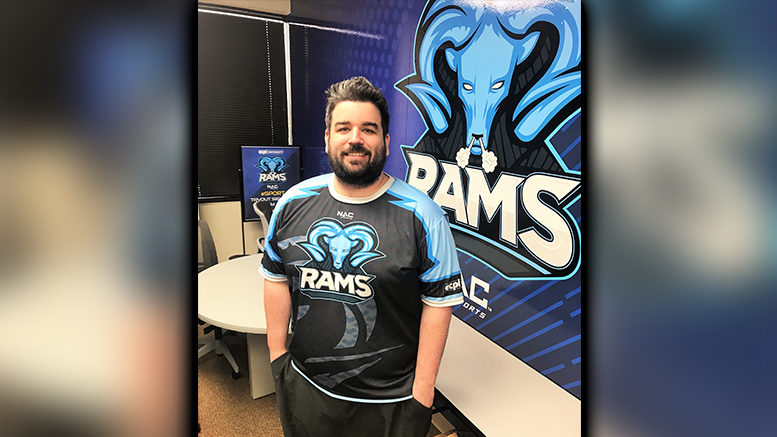 One would be hard pressed to find a man more competitive than ECPI University’s new eSports head coach, JJ Myers. He’s been competing his whole life. Passionate about baseball from an early age, he played varsity all four years in high school. Yet, he was always a bit different than most of his teammates. In addition to baseball, he was also an avid gamer. In fact, he was making money playing tournaments when he just 13 years old.

“We have the leadership, support, and resources here to do great things. NACE is growing like crazy, adding three to four schools every week. Right now, it has close to 140 colleges and universities. In five years, that number will probably… Click To Tweet

A political science major in college, JJ took a two-year break from school to embark on a professional gaming career. In the fast-growing and highly competitive professional arena, the top gamers earn many hundreds of thousands of dollars a year. He quickly advanced, achieving the rank of D1, putting him among the top 2,000 in the country in League of Legends.

“At one point, I was practicing 12 to 15 hours a day,” says JJ. “I had a good number of people following me on Twitch, so I was making a living at it, but I could not quite break into the very top tier.” Just about that time, NACE – the National Association of Collegiate eSports – emerged on the scene and was growing at a very rapid pace. JJ had a web page he used to publish articles and mentor new players, and he began thinking that maybe coaching was his true calling.

So, what did JJ’s parents think of this? “They were not happy when I took a break from school to go pro,” he says. “Basically, they told me that I could do anything I was passionate about, except this! Now, I keep telling them, ‘I told you so!’ And I will say that they have come around and are pretty impressed.”

They should be. JJ got his first coaching job at Hawkeye Community College in Waterloo, Iowa. The team was just forming. He had a very small budget and no scholarships to offer. When they began playing in Tespa, a network of around 500 college clubs and not a part of NACE, they lost…a lot. And here’s the thing about JJ: He really hates to lose. “I just want to win everything. Losing is against my religion. It’s against everything I believe in. Winning is fun for about five seconds, but losing sticks with you forever.” It’s that winning philosophy that explains how JJ was able to catapult his team into the top 40 during his very first season.

As much as JJ enjoyed coaching that team, coming to ECPI University was an easy decision. “I was super impressed by all the support, especially from the administration,” he says. “I have assistant coaches, which I did not have before and it is so much fun working with people who are as passionate about the sport as I am.

“I was super impressed by all the support, especially from the administration,” he says Click To Tweet

“We have the leadership, support, and resources here to do great things. NACE is growing like crazy, adding three to four schools every week. Right now, it has close to 140 colleges and universities. In five years, that number will probably exceed 700. And I am determined to make sure we are positioned very high on that list.”

To do that, JJ has to recruit, and not just among existing students. He has to find top players, offer them scholarships, and convince them to play for the ECPI University Rams. That’s easier said than done. “In track and field, for example, all you have to do is look at the national rankings of athletes and go visit them,” he says. “There is no such list among amateur gamers. You have to be able to move about in the virtual world and network.” Fortunately JJ really enjoys that part of the job. Why? “It helps me not to lose.”

Made their Mark: ECPI University Students, Faculty, and Staff