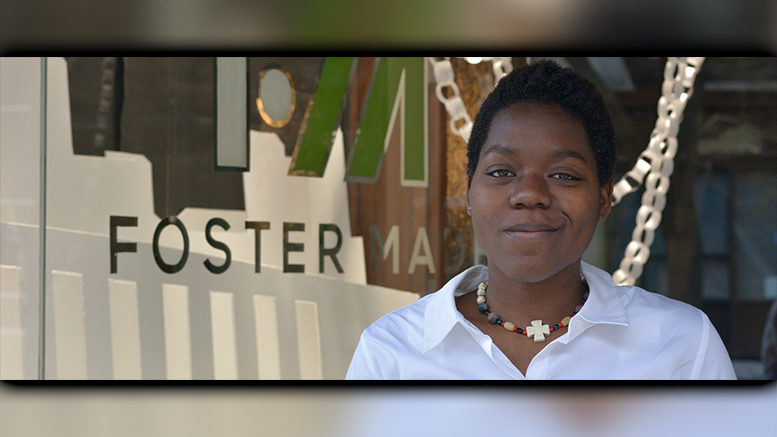 In 2009, her mother passed away from a heart attack. Five years later, her father died from complications of diabetes. It seemed like Thyra Howard’s entire childhood centered on her parent’s illnesses. She had little to no extended family support and no financial stability. But she did have something going for her.  Something not visible, not measurable. Thyra has the ability to persevere; she has passion; she has grit.

Thyra spent all of her spare time caring for her ailing father, and at times, much more than just spare time. In fact, she often missed school to stay home to care for him. Then, Brenda Yancey, a counselor for Virginia Union University’s Upward Bound Program, entered Thyra’s life. With Ms. Yancey’s continuous caring, counseling, and assistance, Thyra graduated from high school with Ms. Yancey cheering in the audience. “No matter what you taught her, Thyra ran with it,” says Ms. Yancey.

Prior to graduation, Thyra entered the Mayor’s Youth Academy in Richmond. A longtime partner with the program, ECPI University allows young people the opportunity to take introductory classes. In July 2015, Thyra first walked through the doors of the Richmond/Innsbrook campus and began her journey toward becoming a web developer. She would have to overcome many obstacles to make that happen.

“There were so many nice people on campus who offered to help, but I was too stubborn, and I tried to tough it out.” Click To Tweet

Living about 16 miles away from campus with no direct bus service, transportation proved to be a challenge. In addition, as the holidays approached, Thyra began to feel lost and alone with no extended family support. “I was afraid to ask for what I needed because in the past I had been bullied a lot,” she says. “There were so many nice people on campus who offered to help, but I was too stubborn, and I tried to tough it out.”

Sometimes, part of being successful means knowing when to step back a little in order to think. Thyra took a short break from classes. During those couple of months, she came to a realization. “I really wanted my education,” she says. “That was the last thing I had to hold on to.” Thyra gathered her passion and determination to finish what she had started, and made an appointment with Campus President Jacob Pope to return to school.

“I sat out in the lobby, too scared to see him at first,” says Thyra. “But eventually I worked up the nerve and entered his office. In our discussion, he challenged me to show him I was serious about finishing my degree. He woke up that part of me that knows I’m capable enough to make something happen without expecting the worst possible outcome.” Thyra was in her seat when classes began the following term.

The trip to and from school meant rising at 5:00 am and taking one bus from her neighborhood to another bus stop, and then transferring to the bus which would take her 2.5 miles from campus. Thyra then rode her bicycle to complete the last leg of the journey. In the afternoons, she reversed the trip, but since the first bus didn’t come until after 4pm, she often arrived back at home as late as 8:00 pm. “In the winter, my bike would slide in the snow,” she says. “I got splashed – a lot. Gloves didn’t really keep my hands warm. I would wear three to four layers under my coat, but I still got wet and cold. I’d dry out either at school, or on the bus.”

“I knew I had to get accustomed to doing the things I needed to do in order to build the strength and skills to accomplish what I wanted to do,” Thyra said. Click To Tweet

When Thyra’s bicycle wore out, Mr. Pope and ECPI University helped her get another. She kept coming to class. At one point she was involved in an accident while on her bicycle. Still, Thyra kept coming to class. “I knew I had to get accustomed to doing the things I needed to do in order to build the strength and skills to accomplish what I wanted to do,” Thyra said.

Soon, Thyra completed an externship and attended a hack-a-thon in New York. In class, she learned to stand up for her ideas, and outside of class, worked on various projects of her own design. Her perseverance and passion paid off. Last year, she earned her Bachelor of Science degree in Computer and Information Science, with a concentration in Software Development.

With the continued help of Campus Career Services Director Sara Stone, and Career Services Advisors Deelynn Leigh and Jeff Edwards, Thyra secured employment; however, she wasn’t done. She volunteered both on and off campus, including helping out former classmates with their current projects. She continued to search for that dream position, and in January, entered an apprenticeship with Foster Made.

"They (ECPI University) help me improve, build on what I’ve learned in school and bring an overall professional polish to my work.” Click To Tweet

“They have created an environment that is both nurturing and interactive,” says Thyra. “They assist where they need to, but they also challenge me.  They expect you to hit the ground running from where you are, not where they expect you to be. They help me improve, build on what I’ve learned in school and bring an overall professional polish to my work.”

The apprenticeship lasts six months and at the end of it, both Thyra and Foster Made have the same goal – a full time position with the company. “My manager has high expectations and enjoys my enthusiasm,” she says. “He sees I am capable and excited about what I’m doing, and he believes I am progressing.”

Cybersecurity Career Takes off Thanks to Flexible Scheduling

Hands On Learning Benefits all Students at ECPI University

Be the first to comment on "Perseverance and Passion: Graduate Thyra Howard"