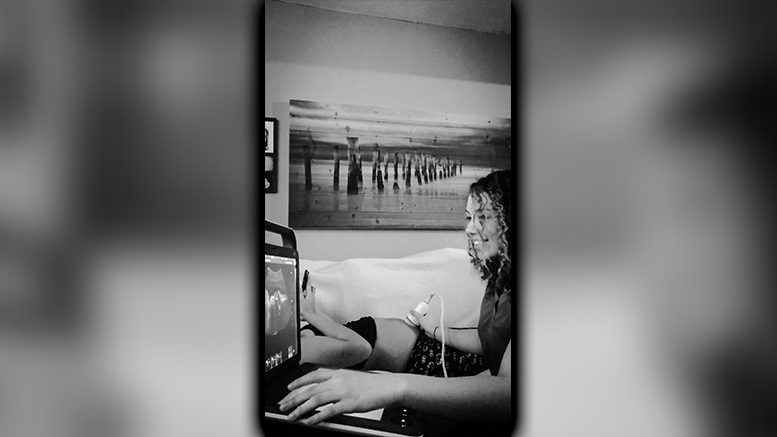 When Hailey Harris began searching for a new career, she knew she wanted to be in the medical field. Specifically, she wanted to work with new mothers. That made a Diagnostic Medical Sonography degree an idea choice for the former hairdresser.

When Hailey graduated from ECPI University’s Newport News campus in 2017, she immediately went to work for a nearby hospital. After about a year on the job, she was still enjoying her work, but she also saw an opportunity. “In a clinical setting, it’s all pretty fast paced,” says Hailey. “For most new mothers, the first ultrasound is a quick process. There’s not a lot of time to really look at the images and most providers no longer give you a photo of the baby.”

“For most new mothers, the first ultrasound is a quick process. There’s not a lot of time to really look at the images and most providers no longer give you a photo of the baby.” Click To Tweet

That’s when Hailey got the idea to start a mobile ultrasound service. It’s called Carrying Precious Cargo. She offers two different packages for $75 or $100. Parents cannot only hear the heartbeat but can also see their baby’s face, learn its gender, and are left with keepsake photos and a video. Currently, Hailey is marketing her service through word of mouth and social media. And although she’s only been in business since November, she says the response has been very good.

“My first customer was my best friend, so that was a really gratifying experience,” Hailey says. “Of course, all of them are pretty great. I had a mother recently who invited her entire family and they all dressed up in Christmas pajamas for the occasion. Everyone had such a great time together.

“I have also found that military families especially enjoy this service. In most clinical environments, scheduling ultrasounds around the demands of military life is pretty tough. So, it is really meaningful to their families who are often spread across the country.”

For the time being, this is just a side business for Hailey who still works at two different hospitals. However, she’s fairly certain that she is the only person in the Coastal Virginia region offering this service. She maintains a pretty busy schedule, and that’s just the way she likes it. “Hailey was passionate about her scanning, spending long hours in the lab working on her technique and recruiting expectant mothers for more experience,” says Newport News Campus Program Director Karen Schubert. “She took advantage of every minute to scan.”

“I feel so fortunate,” says Hailey. “Sometimes I cannot believe that I get to do this for a living. It’s just awesome!” Click To Tweet

In addition to her regular work duties, Hailey also serves as a clinical instructor, helping students complete their rotations at the hospital. “I feel so fortunate,” says Hailey. “Sometimes I cannot believe that I get to do this for a living. It’s just awesome!” Contact Hailey by visiting carryingpreciouscargo.weebly.com.