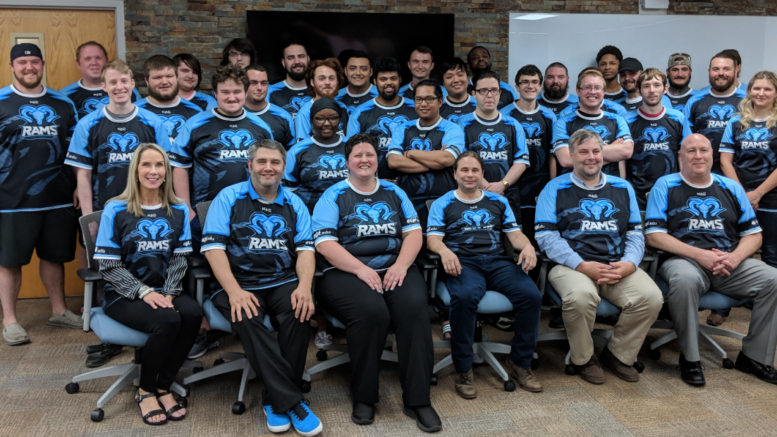 With a roster of 35 players, the ECPI University Rams have begun its first season as a collegiate-level eSports team. “Our first match was a loss against the University of Indiana, but we pulled it together, focused up, and took the next match against the University of Arkansas even more determined,” says Coach Stephen Arthur. “After that, it was a moment of relief and joy that we won.  All the hard work we put into practice paid off!”

ECPI University is among the first 100 colleges and universities to join NACE (National Association of Collegiate eSports) in this fast-growing sport. And the school is investing in the team’s future. Its new eSports Arena is built with top-of-line gaming PCs from Dell’s Alienware line. These machines have everything needed to ensure the best gaming experience and performance possible. Running the I7-8700K six core processors and NVIDIA GTX-1080TI graphics cards, they pass the test for even the most demanding games.

“In addition to powerful processing, we also equipped each station with high-end gaming monitors that ensure smooth game play, so that players do not miss a single second of action in the game,” says Athletic Director Mike Glover. “We have 24-inch curved LED monitors that run at 144hx refresh rate and 1ms response time. There’s also professional-level gaming keyboards and mice from Logitech, ensuring the most accurate and precise movement within each game. Our players cannot get enough time on these machines. They absolutely love them!”

“It gives students a chance to be part of a real team with real goals, and gives the team captains opportunities to lead their team – both in-game and out.”

While the team is young, the outlook appears bright. “Things are going well,” says Coach Arthur. “Our players are in the arena several times a week for coaching and practice sessions, and they have been getting very good! Many of them were already very good, and we’ve been encouraging these types of players into leadership positions on the team. And it’s good for the University. It gives students a chance to be part of a real team with real goals, and gives the team captains opportunities to lead their team – both in-game and out.”

Leaving their Mark on the World: ECPI University Students, Faculty, and Staff

Runs in the Family: ECPI University Graduate Watches her Son Graduate, Too!

Be the first to comment on "ECPI University’s eSports Team, the Rams, Begin their Inaugural Season"