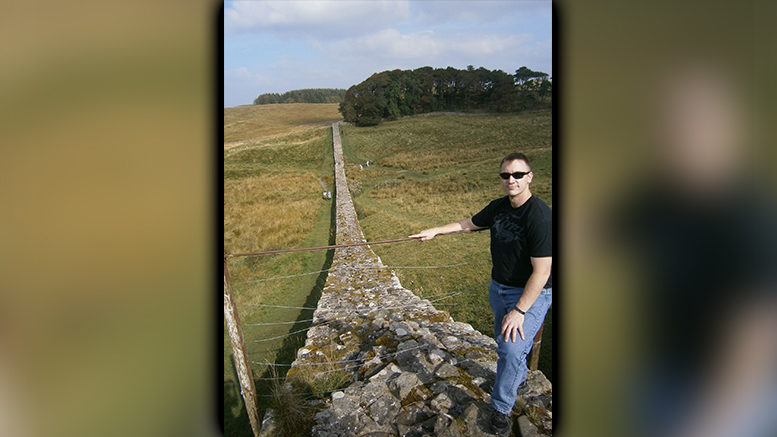 It’s been said that the most successful people are those who can adapt to change. If that’s true, then Michael Ahrendt’s future looks pretty bright. After 15 years in the Navy – which included a tour in Iraq – Michael began thinking about what he would do after he retired in five years.  One of his fellow sailors had recently earned a degree online, and Michael figured he would do the same.

After being reassigned to Japan, Michael enrolled in ECPI University’s online Electronics Engineering Technology program. With all of his training and in-service education, he had a good head start on his associate’s degree. Then came a career-alerting event. The Navy was implementing a structure shift that would force some personnel out of the service while others would be allowed to make lateral moves.

Michael was fortunate. He could go from electronics to intelligence…if he could complete the required training and pass a series of exams. If not, he would be out of the military five years shy of earning his pension. Michael picks up the story from here:

“I explained the situation to ECPI that I did not want to quit but I could no longer continue,” he says. “They did not hesitate to let me put the degree on hold. It took me a year to transfer from Japan, finish several new schools, and then relocate to England where my new career would begin.

[Tweet “It took me a year to transfer from Japan, finish several new schools, and then relocate to England where my new career would begin.”]

“After a year, I told ECPI that I was ready to start again and I was back in the thick of it a month later. I continued going part time until it was time to transfer back to the United States for the final leg of my career. I had a few classes left before my degree was completed and again ECPI was amazing. I transferred from England to Georgia and during the transition there was no way I would have been able to continue. I put the degree on hold again for about four months. Once I was able, I started back up again.”

Michael finished his associate’s and successfully transitioned to his new intelligence career. He then decided he would have a much better chance of landing a prime government job after retiring if he had a bachelor’s degree. He came back to ECPI University and resumed his online education.

Michael began looking for an intelligence job with the government but was not making any headway. “This is about the time in a retiring military person’s career that we really start to get nervous,” says Michael. That’s when he reached out to ECPI University Online Career Service Advisor Rae Sewell who put him in contact with a veteran recruiting company which led to an interview with global mechatronics solutions provider Stäubli.

[Tweet ““I never even realized how much I did not like what I did the last few years in the military until I retired and put the degree that I earned from ECPI University into use!””]

Michael practiced everything Rae had taught him about interviewing and figured he had nothing to lose. “It was my first real interview and since I was probably not going to get the job, I figured I would at least use it as an opportunity to learn what employers ask during the interview process,” Michael says. “That interview lasted almost five hours! A week and a half later, I received an offer. It only took me a fraction of a second to forget that I ever wanted a federal job!

“One of the things that I enjoyed in the military was being able to travel. As a field service technician, I am now working all over the United States, Mexico, and Canada. I cannot even begin to express how much I enjoy working on robots and getting paid to go see the world. I never even realized how much I did not like what I did the last few years in the military until I retired and put the degree that I earned from ECPI University into use!”

Graduation at Columbia Becomes a Family Affair for Father and Children