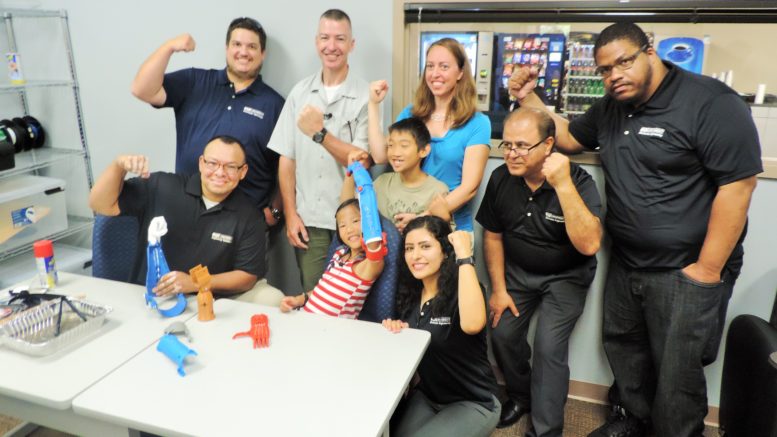 Throughout the world, there are children missing hands and arms, a large number of which live in third-world countries and war zones. Impoverished, most have no access to artificial limbs.

Even in the United States, many young people struggle to function without an assistive device. Why? They’re expensive and insurance companies oftentimes do not pay for them because children outgrow them so quickly.

Now with the help of 3-D printers, students at ECPI University’s Richmond/Innsbrook campus are joining a global movement by making and donating assistive devices to children in Richmond and throughout the world. Recently, the campus formed a chapter linked to a network of volunteers called Enabling the Future.

Through her research, chapter advisor and EET faculty member Dr. Negar Ghochaghi realized this was an ideal opportunity for her students. By establishing an e-NABLE chapter on campus, her students could learn and help others, literally by giving the world a “helping hand.” ECPI University’s Graphics Communication Course, part of the EET/MET curriculum, pairs well with this effort as it prepares students for careers in Computer-Aided Design (CAD) and printing industries.

“I believe that by having this chapter, we are giving our students the opportunity to apply newly-learned skills in a very practical way,” says Dr. Ghochaghi. “They will see the results when a child uses what they’ve created.”

[Tweet “They will see the results when a child uses what they’ve created.”]

They got that opportunity this summer, when the chapter’s first two recipients arrived on campus, eager to receive their new limbs. One of those children, Lydia, has managed pretty well with one arm, but her family is thrilled that she is receiving this helping hand. “ECPI University has told us that if we have any problems, if it were to break, or even if she wants one in a different color, they would print us another one,” says her father.

Students like Joseph Andarz are only too happy to oblige. “To give a little hope and see that hope shine through their eyes,” he says, “it’s a really wonderful feeling.”

Be the first to comment on "Prosthetic Devices for Children, Printed by ECPI University Students"