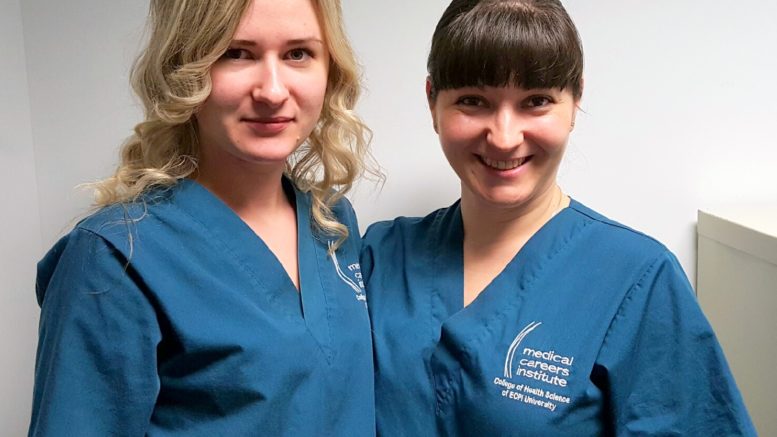 Growing up in Pridnestrovie, Moldova, Svetlana Suhanova was an honor student. Had she remained there, finishing school speaking her native language would have been the easier path. Yet, she and her family yearned for America.

“I had relatives in North Carolina who invited my family to the United States for permanent residence,” says Svetlana. “We had to go through a lot of steps and interviews to move to America, which is a long process. When I arrived, my biggest challenge was the language barrier because in Russia I was studying German and I didn’t know English at all. I had to learn English as fast as possible.”

She began taking classes at a nearby school where she met another Eastern European student, Anna Keforenko who was from the Ukraine. Soon, Svetlana started thinking about her future. “I had a brother-in-law, cousin, and friend who attended ECPI University, and they said I should come see the Charlotte campus,” she says. “I felt like I had lost a lot of time already, so I really liked that I could obtain a degree in a shorter period of time. What really amazed me was the relationship between students and faculty members.”

[Tweet ““My experience with ECPI University was very positive. I learned so many things which I know will be helpful in my future life in America.” -Anna Keforenko, Medical Assisting Graduate”]

Svetlana enrolled in the Medical Assisting program and soon suggested that Anna should join her. Like Svetlana, Anna was adjusting to a new country. However, she landed up in America rather unexpectedly. Her husband is a professional figure skater and the two found themselves frequently on the move… from England, Germany, and France to Holland, and eventually, settling in Charlotte.

Svetlana graduated this summer and is now working for Charlotte Medical Clinic. Anna will complete her studies in September. Says Anna, “My experience with ECPI University was very positive. I learned so many things which I know will be helpful in my future life in America.”