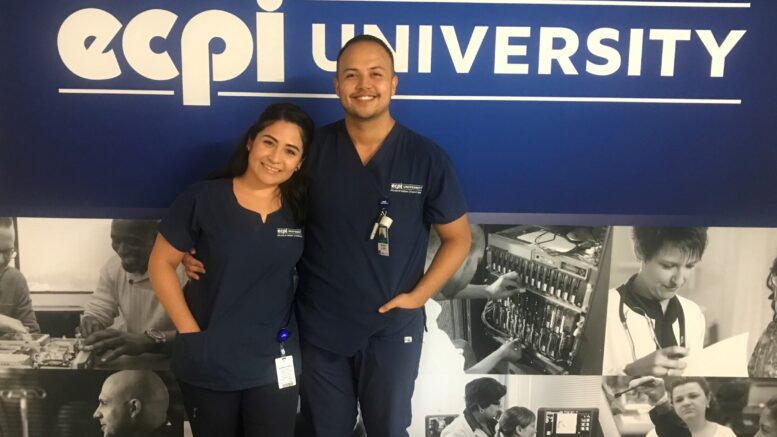 Northern Virginia Couple Share a Passion for Helping Others

Wilber Flores met his now-wife, Charito Sotelo, on a weekend trip to New York City. He was from Northern Virginia, she from nearby New Jersey. At first, it was a long-distance relationship. Wilber was a Certified Nursing Assistant studying to be a Licensed Practical Nurse while attending school during the day and working at night. On weekends, he would visit Charito, but COVID would soon put a halt to those trips. For the time being, Facetime would have to provide the only connection available. Oftentimes, they would spend their time together with Charito using flashcards to quiz Wilber as he prepared to take his LPN NCLEX.

Wilber proposed to Charito during the short break in between earning his LPN diploma and enrolling at ECPI University’s Northern Virginia campus to begin studying to become a Registered Nurse. All that time spent helping Wilber study seemed to pique Charito’s interest. As soon as she moved to Virginia at the beginning of the year, she too enrolled at the Northern Virginia campus to earn her Associate Degree in Nursing.  “Nursing was always what I wanted to do and seeing Wilber’s passion for saving people and how much he loved it really inspired me,” says Charito. Thus far, she’s maintaining a 3.78 GPA.

“The whole reason I went to nursing school is because I want to save peoples’ lives and be there for them on their worst days.”

Wilber has now completed the LPN and ADN Nursing programs without ever taking a break or failing a course. He had always wanted to work in the ER, but as he was nearing graduation, some people tried to steer him away from that direction, saying it was far too competitive. Wilber began applying for ER positions anyway. He is now proud to report that he has been offered an ER position at a hospital in Winchester, Virginia pending completion of his RN NCLEX.

Now, the couple continue their regular study sessions: Charito for her classes on campus, and Wilber for his upcoming licensure exam. Juggling marriage, work, and school is not always easy, but he says it’s all about attitude. “It’s not always about being smart,” says Wilber. “It’s about putting a lot of work into it.  If you want something, you have to work for it.”  Wilber’s hard work has resulted in being on the Dean’s List throughout his whole program. Now, he’s eager to begin the next chapter. “The whole reason I went to nursing school is because I want to save peoples’ lives and be there for them on their worst days.”

Be the first to comment on "Love Leads to Marriage, Marriage Leads to Nursing"