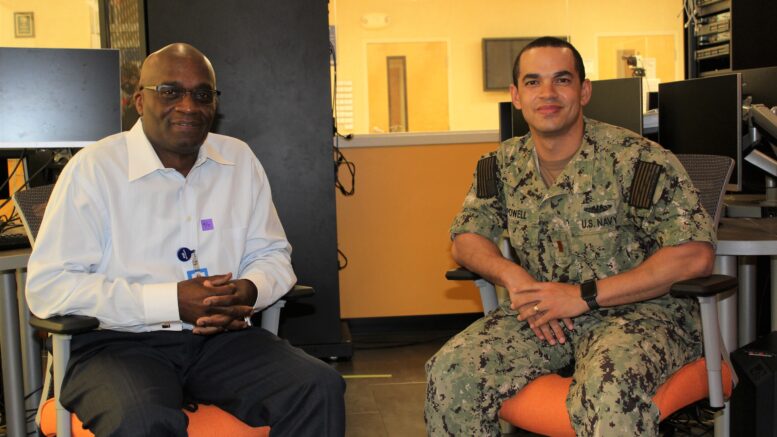 Finding his life’s calling did not come easy to Jeanpaul Powell. “I really had no idea what I wanted to do professionally, to be honest,” he says. “I would stress about that very detail.” After high school, Jeanpaul worked as a medical assistant, cell phone salesman, telemarketer, and bartender before joining the U.S. Navy at age 26. He would end up serving on a fast-attack submarine, and after a few years, began thinking about becoming an officer, but that required a college degree.

While Jeanpaul enjoyed life as a submariner, he was also thinking about career paths within the Navy that translated to promising civilian careers later on. He began noticing all the IT job postings for people with security clearances, something he already had. “At first, I didn’t have a particular interest in IT, however I wanted a stable and in-demand profession,” he says. “So, I chose a field completely outside of my work experience.”

“The faculty encouraged us to struggle to find answers rather than just providing us with a clear solution. It was challenging, but it did make me very proficient at searching for answers with very little information to start from. I think this is a very useful skill in all aspects of IT.”

Now, this former Petty Officer First Class is a commissioned naval officer and is about to become a Cyber Warfare Engineer. My experience at ECPI was very fruitful,” says Ensign Powell.  “There were many things that, although challenging, set me up to succeed later on. Most importantly, there were more times than I can count when during a project or assignment we would come up against problems that we had to dig through Google to find the answers. In fact, the faculty encouraged us to struggle to find answers rather than just providing us with a clear solution. It was challenging, but it did make us very proficient at searching for answers with very little information to start from. I think this is a very useful skill in all aspects of IT.”

Perhaps Jeanpaul’s most gratifying discovery centered on his motivation to pursue cybersecurity in the first place. “I learned throughout my time that even though I chose IT for the pay, it turned out that I actually had an aptitude and an interest in it. I would have never discovered this had I not taken that step.”

Be the first to comment on "Sailor Earns a Degree and Commission, Then Finds Purpose"