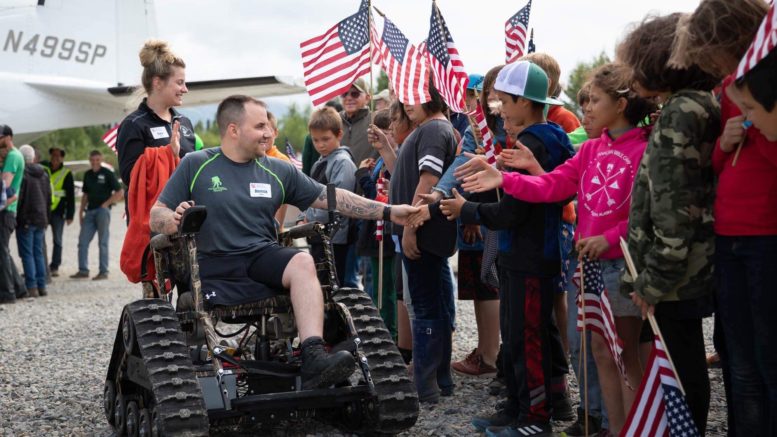 Derrick Sharpe is a Raleigh Campus Cybersecurity student. He is a veteran. And his presence on our campus serves as a constant source of inspiration and a reminder of what is possible.

While serving his country, Derrick lost a leg to an IED, and had to have extensive reconstruction surgeries, not just to limbs, but internal organs, and his head. He spent more than two years barely alive and wishing he wasn’t. Yet through sheer resilience and determination, he has recovered and will soon earn his bachelor’s degree. He has maintained a high GPA despite some absences due to numerous doctor’s appointments and ongoing health issues.

“No one who has ever met him has any further excuse for their own failings. All I can says is that Derrick Sharpe is a living, breathing testament to the human spirit.”

Derrick typically shows up on campus at 6:00 am to do labs, mainly because he is in too much pain to sleep. But it’s more than that. Derrick, on his own, has spent thousands of dollars on additional equipment, just so he can fully assimilate everything he learns in class. He has routers, switches, a storage and email server, and firewalls. He has invested in numerous Hak5 tools and has partnered with ISSA (Information Systems Security Association) experts to do side work so he can learn more about penetration testing, incidence response, and hardening.

Keep in mind, Derrick does not have to do any of this. Due to disability, he is fully supported by his military benefits. It’s just not in his nature to do nothing. And yet, as he would tell you, he comes from nothing, and he will be the first in his family to obtain a college degree.

A few months ago, our campus high school representative had some kids come in who were, shall we say, difficult. They only came on the field trip to get away from school, and were totally disinterested, some even sleeping through the presentation. I was only there a few minutes and the rep came to me, apologized, and said he was going to end the tour early. I said, ‘I think you should have Derrick speak to them before they leave.’ This was unplanned. Derrick rolled in on his wheelchair and seven minutes later, he finished. Seven minutes was all it took for them to go from unfazed to tearful. No one who has ever met him has any further excuse for their own failings. All I can say is that Derrick Sharpe is a living, breathing testament to the human spirit.