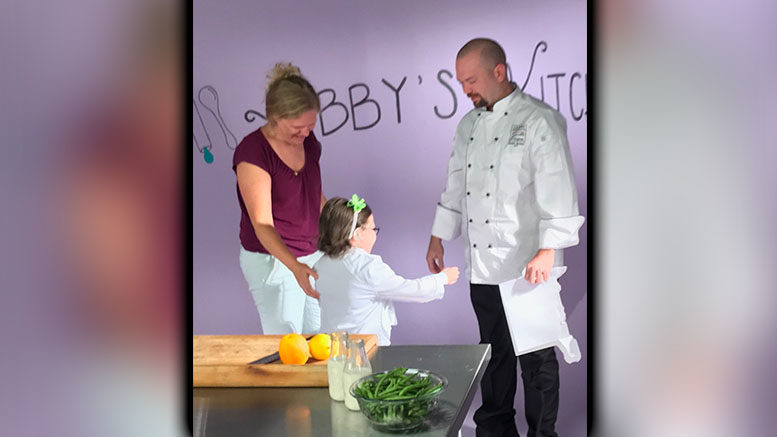 Not long ago, Abby Furco was given less than 48 hours to live. When she was just four years old, she was diagnosed with a rare form of Leukemia, and spent nearly a year undergoing an experimental treatment. She went into remission, but relapsed a few years later.

Incredibly, Abby’s doctors found a bone marrow donor in Germany that was a perfect match, but complications during the treatment left her near death. Somehow – and doctors really can’t explain why – she was able to fight back. More than a year later, she is still fighting. Throughout her ordeal, one thing has kept her spirits up. One thing has allowed her to focus on something other than her disease: her love of cooking.

“After watching Food Network over the years since her cancer relapsed, Abby decided she wants to be a chef,” says her mom, Patty. “She was limited to bed for months at a time, several times, over these past three years. Food Network was something she could listen to, and it always interested her. She learned so much about food, preparing it, and describing it. It’s been fun to watch.”

[Tweet “She learned so much about food, preparing it, and describing it. It’s been fun to watch.”]

When video production company Studio Center learned about Abby’s dream, members of the creative team decided they might be able to help her make it come true. In short order, they created a set for a show called “Abby’s Kitchen,” where Abby could actually host her own show. They’ve even reached out to Food Network with the idea of making it a real program.

Now before Abby can become a real chef, she will have to finish high school and go to culinary school. That’s when ECPI University’s College of Culinary Arts – Culinary Institute of Virginia (CIV) – becomes part of this story. When Abby came to the studio to film her 30-minute TV show, CIV alumnus and faculty member Brandon Morrison was there to present her with a full scholarship.

“In addition to meeting Abby, who is an amazingly sharp and pleasant little girl, the highlight of my day was when leaving to say goodbye, I stopped by the green room to see her reading the book we gave her:  Letters to a Young Chef, written by one of the most prominent chefs of our time, Daniel Boulud,” says CIV Campus President Andy Gladstein. “We hoped Abby would find enjoyment and inspiration within these pages, and it appears she did! We are excited to see her recovering and look forward to having her as a student in about eight years!”

Hands On Learning Activities Take Students into the Community