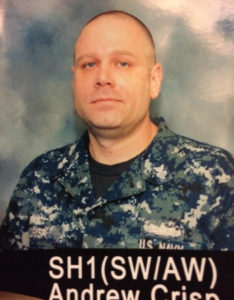 By his own admission, Andrew Crisp was not college material, at least not at the beginning. “When I first tried college, I sort of figured that a D was as good as an A,” says Andrew. “Either way, I had passed!” Not surprisingly, he dropped out. “My dad was furious. It took a long time for him to get over that.”

Andrew decided that the military was a better fit and joined the Navy. He served 20 years and enjoyed every moment. With retirement looming, his wife believed his years in the Navy had matured him personally and professionally and encouraged him to give college another try. “Actually, she didn’t give me much choice,” says Andrew. “She said, you’re going to use your GI Bill and you’re going to go to college!”

A friend had graduated from ECPI University and highly recommend he take a look.

[Tweet ““I loved the five-week terms and how each set of classes built on what he had learned the previous term. The fast pace just makes the time fly by.” ~Andrew Crisp, Homeland Security Graduate Virginia Beach Campus”]

Having served as an emergency manager for a naval health clinic, Andrew was drawn to the Homeland Security program. It turned out to be a good choice. “I loved the five-week terms and how each set of classes built on what he had learned the previous term,” he says. “The fast pace just makes the time fly by.”

In Andrew’s case, that would be an understatement. He has just earned his bachelor’s degree and has done so in near-record time. Attending class year round – even doubling up on classes on occasion – he has managed to do it all in just a year and nine months, finishing with a 3.89 GPA.

Now, Andrew and his family are preparing to return to his childhood home in Rutherford County, North Carolina where he plans to work in the county’s emergency operations department.

For the moment however, he is allowing himself a moment to look back and think about all that he has accomplished. “I am proud of what I’ve done here at ECPI University,” says Andrew. “I know how much I disappointed my mom and dad when I dropped out of college, but I also know they are very proud of my service. I’m just glad they were able to see me walk across that stage. “Every good thing I’ve ever done is my mom and dad’s fault!”