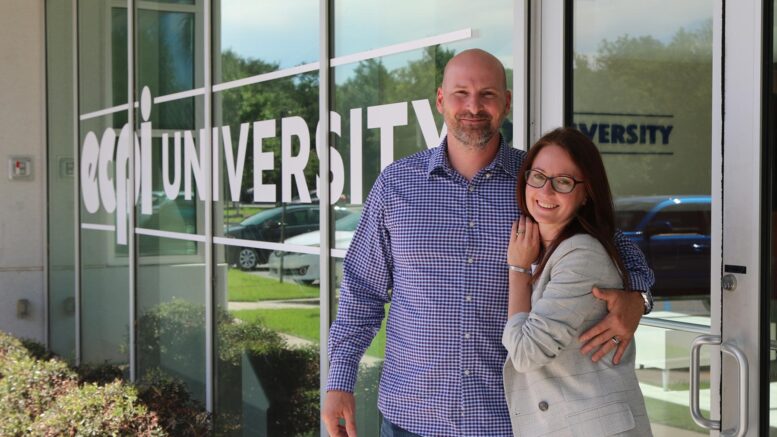 Diana Musialska-Rose and Matt Rose met long before they attended college together.

Diana is from Poland. Matt is from the United States. By all accounts, they probably could have gone their whole lives without ever meeting.

But a shared sense of adventure and need for travel brought them both to Kuwait as contract workers in 2017. Matt, a tire technician, had already worked at the Weapons Station twice before, once from 2006-2009, and again in 2011.

Diana, who is fluent in Arabic, lived in the same apartment building as Matt. They became friends on the 30-minute bus ride to and from their housing complex and the base. The rest is history.

The duo worked hard during the week, and fed their sense of adventure on the weekends. “When it was a long weekend, we would travel for fun,” said Diana. Over the next couple of years, they went to Turkey, Thailand, Italy and Poland.

Eventually, Matt’s contract ended and he headed back home to Charleston, South Carolina. The duo didn’t let that stop them; they made the long distance relationship work.

In July 2019, Matt started as a Mechatronics student at ECPI University’s Charleston campus. He wanted to move away from the inconsistency of contract work by earning a degree.

“When I first started this program, I didn’t have any idea what I was doing or what to expect. My classmates were helping me out. Diana was helping me to understand things better,” said Matt. “My first week I was like, I’m not getting this. I haven’t been to school in 20 years, I’ll just quit while I’m ahead.”

Matt actually walked out of one of his classes to quit. His professor noticed him leaving, and followed him. “Dr. Ogletree chased me outside, and told me to come back inside. She said ‘don’t quit – let’s shake the cobwebs off instead.’ She told me she looked forward to seeing me in class on Wednesday.”

It was just the pep talk Matt needed to stay in school.

In January of 2020, Diana headed to the United States for a long visit with Matt. “I was in for a visit and I was planning to stay for three months. I needed to see greenery and trees before heading back to work in Kuwait,” said Diana.

Instead, they got engaged on January 31, 2020, Diana’s birthday, and then married four days later. “I just couldn’t let her go!” said Matt.

For Matt, the toughest thing about going to school was time management. “I worked the entire time I was going to school, and then I was also driving for Uber on the weekends,” said Matt. “It’s a lot of balance — it doesn’t matter if you’re married, engaged, or whatever your circumstance — going to school and working full time isn’t easy.”

Diana soon followed in her husband’s footsteps, and started at ECPI’s Charleston campus in April 2021 in software development. Diana wanted to use her language skills — she’s fluent in german, english, arabic, polish and french — in a new way.

“I didn’t like computers before, but I saw that it’s good to know more. I’ve always wanted to combine my languages with IT. I love math, especially trigonometry,” said Diana.

Together they made it through tough classes, late night projects, online discussions and more. It all culminated on graduation day in July. Graduating at the same time was “wild,” said Diana. “It didn’t even feel real!” agreed Matt.

Matt was named Best Student of 2022 and Best Student of the Program. “He deserves everything for the progress that he made from the very first day, when he had his first class, and he was so nervous about it. You’re tired, you’re working, you’re married — he overcame so many obstacles,” said Diana. “He didn’t even want a B – he wanted As.”

Diana said it got almost comical the amount of accolades her husband received at graduation. “He won so many awards! He got up so many times to go on stage to get awards that I started booing him to get off the stage,” Diana laughed, obviously proud of her husband’s hard work.

Matt would recommend ECPI to anyone. “With the accelerated programs, and a bigger building, it’s a good experience. The instructors here are fantastic. Everybody is very helpful, especially the career services department,” he said.

The Roses like that Career Services stays in touch long after graduation. “They let us know when they’re meeting with certain companies or if there are any openings. It’s really good,” said Diana.

“Matthew Rose and Diana Musialska-Rose are two of the most motivated individuals I have had the pleasure of meeting and working with,” said Charleston Campus Director of Career Services, Jennifer Santoro. “Both have shown to not only be top students, but also the utmost professionals. They will truly make the ECPI community extremely proud to call them alumni of our University.”