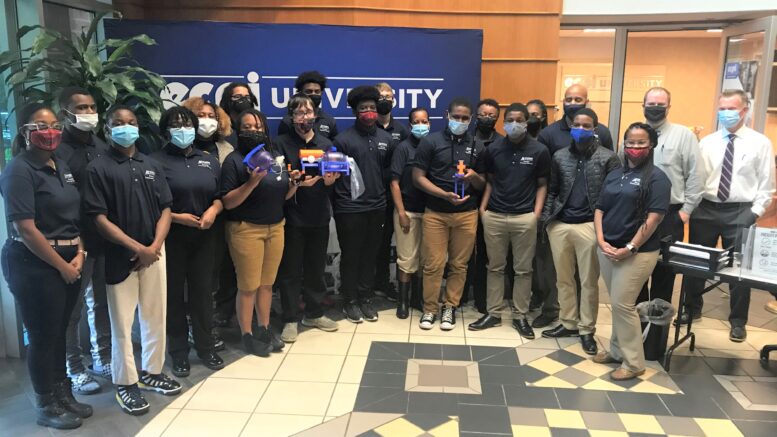 ECPI University’s Newport News campus recently hosted 15 students from Hampton and Phoebus High Schools at its Summer Institute, where they spent part of their vacation working on a solution to a business challenge. With a nationwide shortage of ventilators, they were tasked with exploring low-cost emergency options to fill this gap using a modified manual resuscitator.

When each of the three teams completed their prototypes, they presented them to faculty members and participating partners. One of those partners was John Spallone, director of product development at Spectrum Com Inc. “They can actually contribute in a way that they hadn’t thought, or that this might’ve been what they thought was beyond the reach,” says Spallone. “When they start working on a project like this, they can see, ‘Wow, I can actually do this.’ I think that’s a really important thing for them to learn when they’re really young.”

“I love seeing the new ideas, the new approaches to solving problems, that light bulb going off when they are successful.”

ECPI University provided all the resources for the students. There was a 3-D printer that printed the parts for the prototypes and a computer that generated the blueprints for the pieces. One of the prototypes consists of a blue base supporting a pump that is activated by a movable arm. The pump has a bag and connector for a tube. A motor then goes into an orange cylinder compartment that controls the arm.

For ECPI University Electronics Engineering Program Director Chris Fritzel, it was time well spent. I love seeing the new ideas, the new approaches to solving problems, that light bulb going off when they are successful,” he says.

Even though the school year has already begun, students interested in refining their designs are being welcomed back to campus to continue their work. Because these students decided to spend their summers learning, it caught the eye of the Newport News City Council, which invited them to a meeting so they could be publicly honored.

Get ‘Em While They’re Hot!