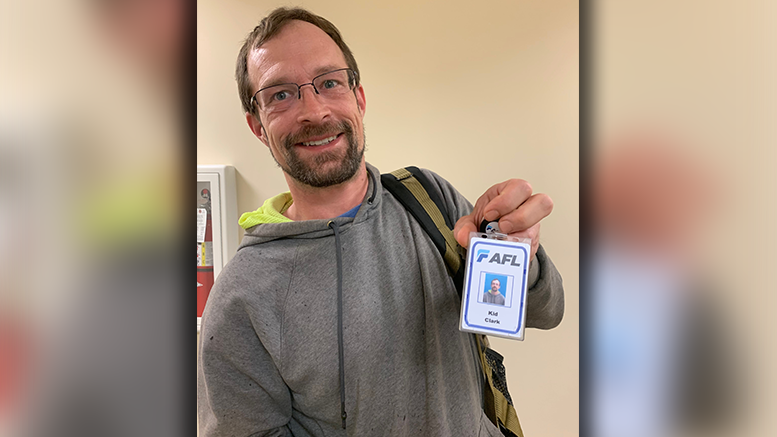 In July 2016, close to Independence Day, Kid Clark walked off a construction site determined to change his life. Single at the time, he had to call his parents for a ride, and when he got home, he started searching the internet for colleges. Soon, he was on the telephone with a representative of ECPI University, and in early 2017, he stepped onto the Greenville campus as a full-time student.

A bachelor’s degree was the ultimate goal, but Clark was cautious, opting initially for an associate’s in the Electronics Engineering Technology (EET) program. Although he was mechanically inclined, he was lacking in word processing and general computer skills. With a little assistance and a lot of determination, he quickly adapted. “That first night, I knew how to turn the computer on, and that was about it,” he said.

Firm in his conviction to get out of the construction industry, Clark started doing plumbing jobs. The work was lighter, but weather still affected his hourly income, causing him to miss Monday and Tuesday classes when he didn’t have gas money and return on Wednesday, his payday. Aside from financial struggles and the learning curve, he battled physical challenges.

“When I was younger, I guess I thought I was Superman. I was known for doing some dumb stuff. I had an accident on an inline scooter, flipped seven times and cracked my skull. That caused terrible migraines . . . I was in pain at some level almost every day in school. It was hard to look at the computer screen and absorb anything,” Clark said.

Injuries Clark sustained in separate incidents prior to enrollment included severed muscles in his leg and a complete anterior cruciate ligament (ACL) separation. “I wrecked my bicycle and essentially ripped my arm off. My shoulder was below my chest plate,” he said. “I was supposed to be dead. Since I wasn’t, I kept trying to do better.”

ECPI University faculty and staff grew accustomed to Clark looking weary, his gait revealing not just a day of hard work, but a lifetime. Still, there was never a doubt he’d make it—despite having to drop some classes, repeat others, take some online and get occasional weekend tutoring. “Kid should be an inspiration to everyone,” says physics and EET faculty member Dr. Ben Davis. “In spite of numerous hurdles, he worked hard and persevered with a smile on his face and an infectious attitude about learning, often when in pain.” Mathematics faculty member Matt Crider added, “Kid is the hardest working student I have ever known. His dedication to his work was on a different level.”

Clark eventually found a steadier job, but proceeding through the bachelor’s program, he dealt with automotive breakdowns, an accident that destroyed his truck, the loss of his beloved grandmother and rhinoplasty to alleviate his migraine headaches. Additionally, a previously diagnosed digestive disorder caused a pancreatic cancer scare, and a freak accident in a swimming pool led to weeks in a knee brace.

By January 2020, few obstacles remained between Clark and the new life he anticipated. He did some odd jobs to earn the money he needed for a haircut and a physical required by a potential employer, and Student Success Coordinator Patricia Metcalf helped him shop for interview attire. In February, Clark accepted a maintenance technician position with AFL in Duncan, S.C., and will soon be promoted to mechatronics technician. He said he’s extremely happy with the job for which ECPI prepared him well. “The [programmable logic controller] class with Dr. Davis was a great foundation, and all of my soft skills were pretty much developed during the time I was in school,” Clark said.

Clark may have renounced the daredevil ways of his youth, but one thing he will never change is the moniker “Kid,” which is his middle name and the only one he uses. “My parents had a cat named cat and a dog named dog, so I guess Kid made sense for me. My dad named me Kid—just Kid. My mom slipped Stephen in front of it on my birth certificate, but that’s who I am,” he said.

Now 40, Clark is concerned with his own kids, who are following his lead. Rachael, 15, is assembling an art portfolio in hopes of attending the S.C. Governor’s School, and Tommy, 17, plans to attend UTI, an automotive specialty school, and someday work with NASCAR. “My main goal was to raise a good family…I had to show them you can make mistakes; things can happen, but you have to come back from them and keep going,” Clark said.

There was no commencement stage to walk, as the 2020 ceremony was cancelled due to COVID-19, but four years after walking off the construction site, Clark graduated. With a grateful heart, he acknowledged everyone who helped him get to that point. “I would never have made it if it weren’t for the people at ECPI University. I was determined to turn my life around, and as of now, everything has worked out,” he said.

“Kid is the hardest working student I have ever known. His dedication to his work was on a different level.”

A Non-Traditional Path to Cybersecurity Career

Be the first to comment on "The Comeback Kid"