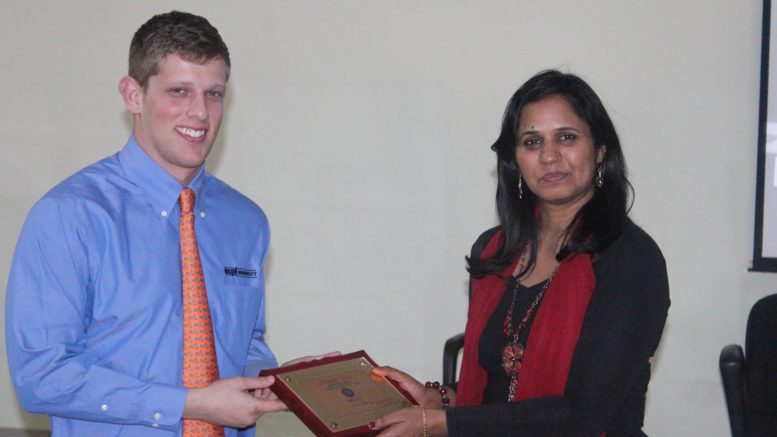 Initiative Being Led by Founder’s Grandson

Hyderabad, India is the capital of southern India’s Telangana state. With a metropolitan population of nearly eight million people, it is the country’s fourth largest city. It is also a major technology hub in a nation that has made IT a centerpiece for economic growth.

That’s why Hyderabad was one of the first places Sam Dreyfus went during a recent visit. He is the grandson of ECPI University founder Alfred Dreyfus and son of the current president, Mark Dreyfus. Sam has been tasked with leading a new university-wide initiative to bring Indian computer science students to America to earn their master’s degree.

Sam Dreyfus (center) at the Malla Reddy Institute of Technology

“India’s middle class is burgeoning and there is a great thirst for advanced education,” says Sam. “Indians view education as the best way to improve their standard of living.” During his trip, Sam visited American consulates in Hyderabad and Chennai, along with more than a dozen colleges and universities throughout Southern India. He is planning a second trip this summer to the Northern part of the country. “I was really touched by the reception that I received. There is a tremendous interest in America. For these students, this represents not just an opportunity to advance their education but to experience our culture.”

Of course, it’s not just the Indian students who receive the benefits. Having Indian students on campus broadens ECPI University’s already diverse student body and opens pathways for learning that extend beyond the classroom. “As a nation, we no longer operate in a vacuum,” says Sam. “When our students graduate, they become part of a global economy. Having an opportunity to study with people from another culture enhances their level of preparation.

“There is so much we can learn from each other. Indian students have a great work ethic. They are passionate about education, and passion is contagious. By learning how to communicate with someone from another country, working together, you learn how to view things from a different perspective. So when our students graduate, that could make them even more valuable as employees.”