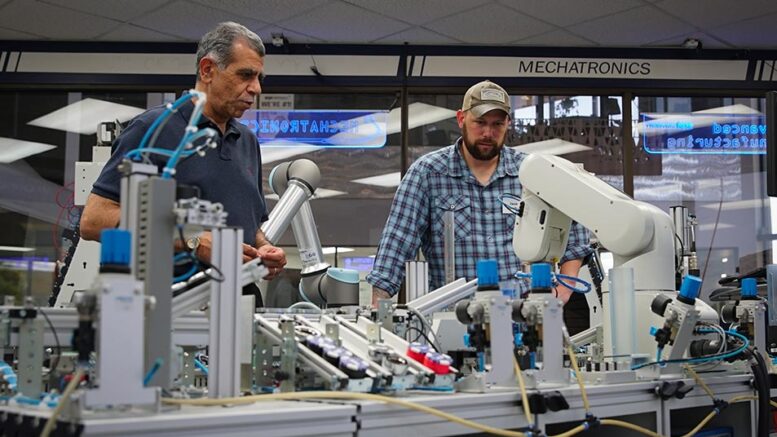 Students traveled from Connecticut, Delaware, Ohio, South Carolina, North Carolina, as well as locally, to participate in hands-on lab activities led by experienced faculty and staff. It was the first time any of the participating students had been able to visit the University’s Makerspace and numerous labs in person. “It’s an engineering playground,” said Stephen Waegele, a B.S. Mechanical Engineering Technology student.

Over the course of the Weekend Workshop, students engaged in activities related to 3D drafting and printing, CNC machining, PLC programming, UR robot programming, Arduino programming, dynamic fluid pump systems, hydraulic and pneumatic systems, augmented reality mechanical component assembly and disassembly, and electronic circuitry and measurement instruments. This allowed them to connect concepts they have learned in their online courses to real-world troubleshooting and problem-solving with physical equipment.

“It was rewarding seeing the excitement students had as they were going through their hands-on exercises for that day,” said Dr. Wael Ibrahim, Dean of Engineering Technology. “You could see their eyes lit up as they were building, programming, and testing their experimental setups. The workshop not only provided them with an opportunity to validate the simulation work they have done but to also explore other techniques for programming and controlling the physical setups.”

Students in ECPI University’s online engineering technology degree programs learn how to use industry software, tools, programming languages, and instrumentation through interactive labs and virtual simulations in their coursework, but the Weekend Workshop allowed them to engage in a different kind of tactile learning.

“Being able to touch everything, and design it, to give you an idea of how it physically works…it’s a game changer,” said B.S. ESET student, Jason Mawhorr. Similarly enthusiastic was B.S. Mechanical Engineering Technology student, Lynesey Maloney, who traveled from Connecticut to attend the event. “I don’t regret the 10-hour drive at all,” she said. “I would do it again!”

B.S. student Koji Harashima brought his whole family from Gastonia, NC for the weekend, and 3 of 4 of his kids attended the Friday kick-off meeting and campus lab tour. His son, Raidon, was hooked. He asked if he could tag along with his dad for the Saturday labs and the well-behaved kid was granted permission. “He enjoyed his taste of college,” said Koji. “They made it fun for my son and made him feel included.” And after successfully assembling a small robot from a kit, Raidon received an honorary Certificate of Completion. Vice President of Online Education and eLearning Aaron Wettstein says the weekend test was a huge success for everyone involved. “We are preparing to rollout more weekend workshops in the very near future,” he said.

In Her Own Words: Juliana Formiga