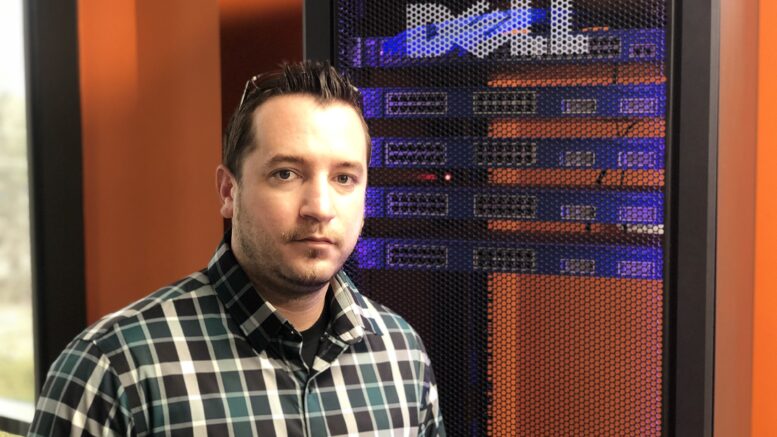 ECPI University is a preferred destination for “non-traditional” students, which actually makes Aaron Platek’s story somewhat “traditional” among his campus colleagues and students. Aaron’s career pathway has spanned many years and includes a global journey. After graduating from high school, he began working on underground utilities in the Hampton Roads region of Virginia. It was no easy job. He worked 12 to 16 hours a day, Monday through Saturday.

Unfulfilled and exhausted, Aaron came across an exciting opportunity, and began traveling the world at the age of 19, repairing condensers at power plants. “I would work anywhere from 60 to 84 hours a week,” he says. “The opportunities were endless, from meeting people from different cultures to sightseeing in all different parts of the world.”

At age 25. Aaron decided to take a summer off. “I sat around the house playing a video game called World of Warcraft from 8 am to 4 am every day,” he says. “I would only eat once a day when I would go out and buy some fast food. Time seemed to slip away, and every day started to form into one. It hit me one day when I realized I had gained 80 pounds and my life consisted of living in a video game. One morning, I was sitting at my kitchen table on my laptop, when I realized I was not in a happy spot.”

That’s when Aaron Facetimed his older brother who was then living in Singapore. He asked him if he thought a career in IT was something he could possibly consider? His brother not only said yes but also told him that the best time to start was right then at that very moment. Aaron took his advice and enrolled at ECPI University’s Virginia Beach campus and ultimately earned a degree in Network Security and Cloud Computing, now called Cybersecurity. At first, Aaron says his motivational level was not all that high. “I would show up, put in five hours sitting at my desk, and then leave to go home,” he says. “After I started to open up and talk to students and teachers, I was encouraged to join the hacking club. This is where I started to learn more and push myself further.

“After I earned my bachelor’s, I swore I was finished with school until my campus program director called me and said I should consider earning a master’s degree. At first, I was skeptical, but I knew he had my best interests at heart, so I signed up.” While working on his graduate degree, Aaron got a job with a company doing HBBS or Host-Based System Security. Soon after, he was promoted.

Aaron is now a System Administrator at the Navy Cyber Defense Operations Command. He also teaches at ECPI University’s Virginia Beach campus where he freely shares his story to motivate others who are looking to improve their lives. He says having a support system is essential. “My brother Joel has pushed me throughout my entire IT career,” he says. “When he pushed me to get my first certification, it gave me a hunger for more. Being around people who are more successful than you makes you want to be even more successful!

“My number one goal is to keep pushing forward, expanding my knowledge. The two major certifications that I want to acquire by the end of next year are the RedHat System Administrator and the CISSP. I am also creating a OneNote notebook with different sections of technology and useful knowledge to help others. Being in the Cyber profession, everyone needs to keep learning more since the industry is a revolving door that keeps changing.”

Military Spotlight: Online Graduate Dwight Kengle in his Own Words