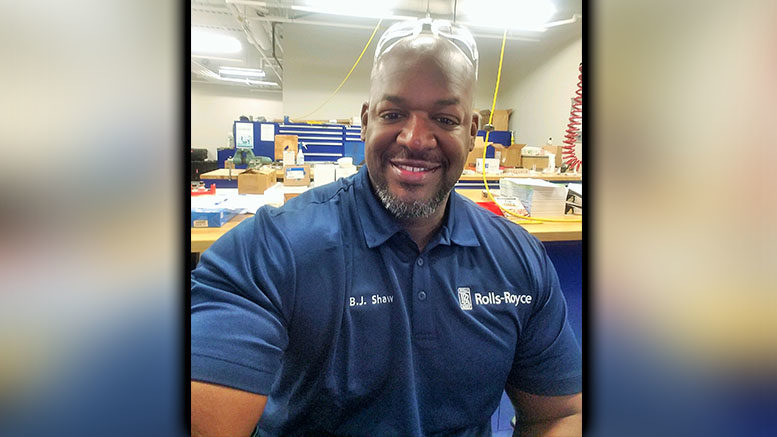 Just six weeks after he first enrolled at ECPI University, B.J. Shaw was sitting in class when he learned that Rolls-Royce had a production facility not far from campus. “One of my classmates said that it was the reason he came to ECPI University, so he could get a job there,” says B.J. “I looked at him and said, well there’s going to be two of us going there, because I’m going with you!”

At the time, B.J. admits that he did not know that Rolls-Royce had sold off its automotive division many years earlier. Still, that did not dim his interest. He started learning everything he could about the company. For instance, this particular plant makes jet turbines. Most importantly, it is a highly-advanced facility, comprised of robots and a wide range of automated systems. That’s why B.J. had enrolled at ECPI University in the first place, to work with robots.

[Tweet “There’s going to be two of us going there, because I’m going with you!”]

B.J. had first attempted college many years ago just after high school, but was unsuccessful. So, he taught himself some basic computer skills and was able to find an entry-level IT job with a hospital. After 13 years, the company that owned the hospital restructured and he was out of a job.

He thought he should probably give college another try, so with his wife’s encouragement, B.J. began looking at schools. “There was no way I was going to spend four years trying to get a degree, so when I saw I could earn my Bachelor’s in 2.5 years at ECPI University, I became very interested,” he says. “I had always wanted to work with robots, so when I learned about the Mechatronics program they had at the Richmond/Moorefield campus, I knew it was definitely for me.”

[Tweet “There was no way I was going to spend four years trying to get a degree.”]

During his two and a half years at ECPI University, B.J. never wavered in his determination to get a job offer from Rolls-Royce. In fact, it kept him motivated. He knew it would not be easy. Rolls-Royce has a reputation for selecting only the best of the best. “The interview process was grueling,” says B.J. “It began with a phone interview. That was followed by an assessment day where you go to the plant and spend eight hours taking tests and doing a lot of interviews. Then you wait to see if you get a call back for a third interview. All in all, it was about a three-month process.

“I was so happy when I got the offer. My life is so different now. I sleep well at night and I wake up in the morning looking forward to work. I could never say that before I went to ECPI University.”