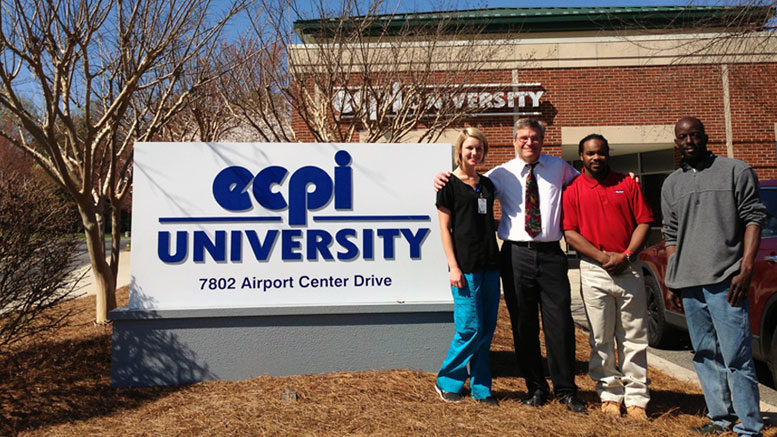 On any given day, you’ll likely find Frank Hughes walking the halls at ECPI University’s Greensboro campus. “I spend as little time as possible behind my desk,” says Frank. “I like to be visible, checking in with students, faculty, and other staff members to see what I can do to help.”

Frank is always thinking about what he can do for others, and that’s why he’s a campus favorite among colleagues and students alike. During his ten years working at ECPI University, Frank has been nominated as “Most Approachable” by students numerous times as well as being named staff member of the quarter and the year.

Through sheer initiative, Frank has expanded his role on campus, always seeking new ways to provide support. He understands what students are dealing with – juggling work, school, and family – because he’s been there himself. Frank graduated from ECPI University, working as a roofer by day and attending classes at night. Before he could even begin his job search, University administrators quickly decided that he was one graduate they were not going to share with other employers.

[Tweet ““I really felt empowered, and I just want everyone here to have that same experience.””]

Right after earning his degree, Frank began working at the Greensboro campus in IT. In just two short years, his talent was recognized once again and he was promoted to Campus Director of IT Support, but that doesn’t quite describe all he does. When he’s not dealing with technical issues, Frank is continuously encouraging students.

“I always tell them, sit close to the teacher, and ask a lot of questions…get your money’s worth!”

“It has been an honor to watch Frank’s progression from a student to a colleague to one of the key people we depend on every day,” says Greensboro Campus President Pamela McMillan. “The fact that Frank started out as a student is a big reason why he is the most student-centered employee here at the campus. He truly has been in their shoes.”

Outside Greensboro, people have begun to take notice. Frank has been asked to serve as a mentor to newer IT managers at other campuses. In that capacity, he provides the same steady guidance he does to students in Greensboro. “When I was attending ECPI, it was such a great experience, says Frank. “I really felt empowered, and I just want everyone here to have that same experience.”

Be the first to comment on "Frank Hughes: Greensboro Campus IT Director, Alumnus, Mentor"